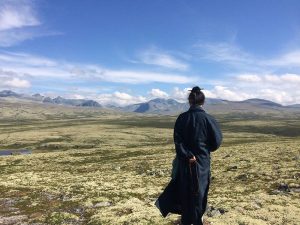 Master Li Hechun is 16th generation transmitter from the Longmen pai (Dragon Gate) lineage of the QuanZhen (School of Complete Perfection) branch of Taoism. The QuanZhen school emphasises inner cultivation and the practice of inner alchemy (neidan) in the interest of cultivating the spirit and benefiting the world. His journey to become a Taoist Master started at the age of seven in the Zhongnan mountains – an area held in high esteem for its rich history of temple tradition and being home to many revered Taoists in history. As a child his temple studies included tai-chi-quan, baguazhang, cultivation, Wudang sword, meditation and Taoist chanting and ceremony. After being ordained Master Li traveled to many sacred mountains to learn from Taoist Masters. In 1998 he journeyed to Chengdu in the Sichuan province where he took the positions of Master for the QinYang Gong (Green Ram) Temple. Since 2011 he has been the Abbot for the ZhiZhen (Complete Reality) temple of Phoenix mountain, and additionally he holds the position of Vice President for the Taoist association in the Sichuan province. Master Li is recognised not only for his accomplishments in the arts and distinguished representation in the Sichuan province, but also for his transliteration and authorship of many books and articles on Chinese history and Taoist customs and practice.

Currently, much of his time in China is focused in charitable initiatives to revitalise traditional Taoist arts in the Sichuan province through restoring temples and promoting the Tao. His current focus is establishing the Chongxue (double mystery) academy in cooperation with Lao Tzu research institute of Sichuan university. The Chongxue academy is situated on Phoenix mountain in Sichuan, and area with immense historical significance dating back for centuries. The monastic study environment gives students the opportunity to experience traditional ritual, practice and lifestyle, and to learn the profound and ancient philosophy and wisdom from the ZhiZhen temple while immersed in the setting and culture.